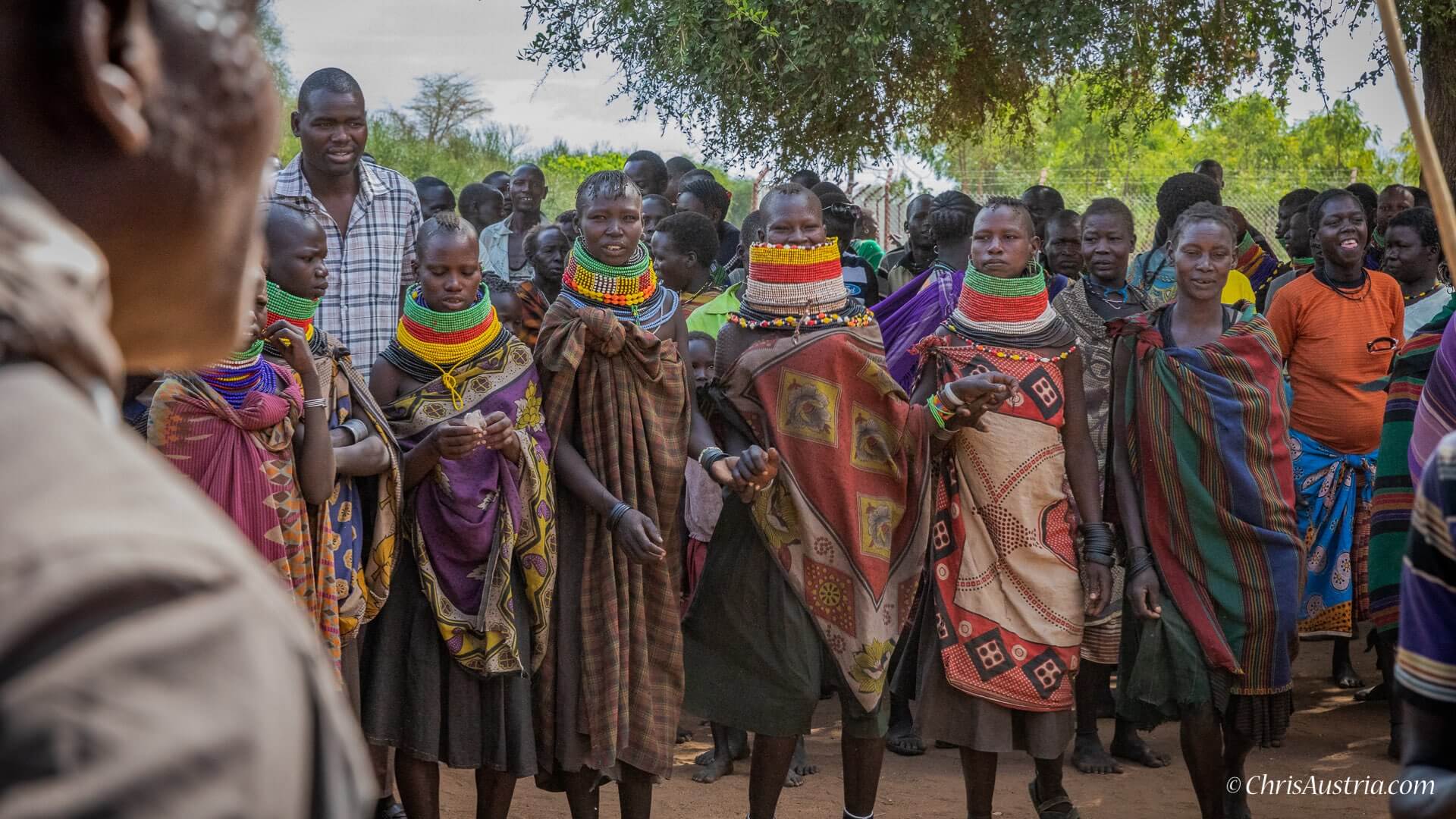 This account is describing my first visit to Kidepo Valley National Park in Karamoja, northeast Uganda in 2015. Since then, I have returned many times, and have taken my travel clients to this stunning region. It always is an epic experience.

Kidepo Valley National Park in Uganda is known as one of East Africa’s most compelling wilderness areas. In 2013, CNN listed Kidepo as the 3rd best safari park in Africa for “spectacular landscapes, and incredible buffalo herds.” CNN went on to say that Kidepo “might be the most picturesque park in Africa.” This place is Uganda’s most remote national park.  It is located in the far northeast corner of the country, between Uganda’s borders with Sudan and Kenya. The region is called Karamoja.

Kidepo Valley is home to the Karamojong, a very distinctive Nilotic speaking people of the Ateker ethinic group. They are related to the Jie and Toposa of Sudan, and the Turkana of Kenya. Anthropologists believe that the Karamajong migrated from Ethiopia to Uganda around 1600 A.D. These agro-pastoral herders have a very rich and vibrant culture that has remained relatively unchanged for hundreds of years. After hearing so much about Kidepo, I knew that it was a place that I had to visit. 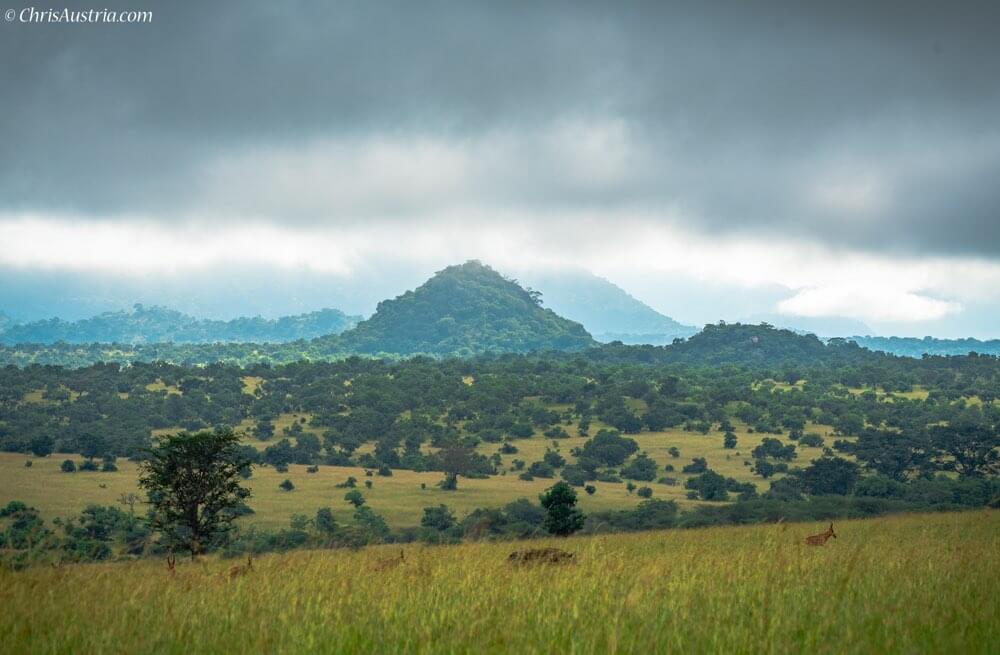 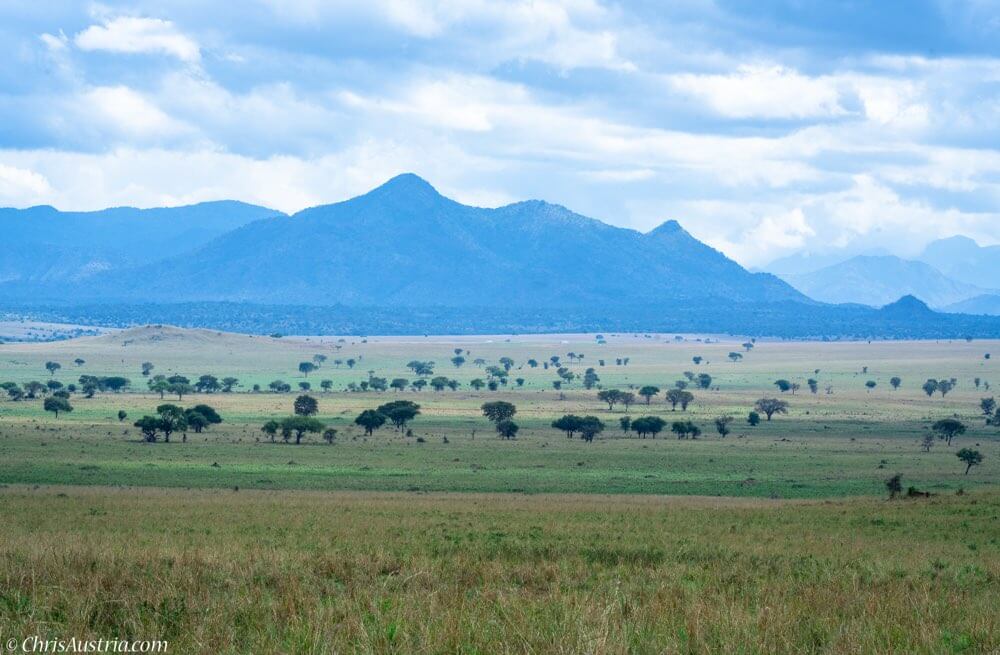 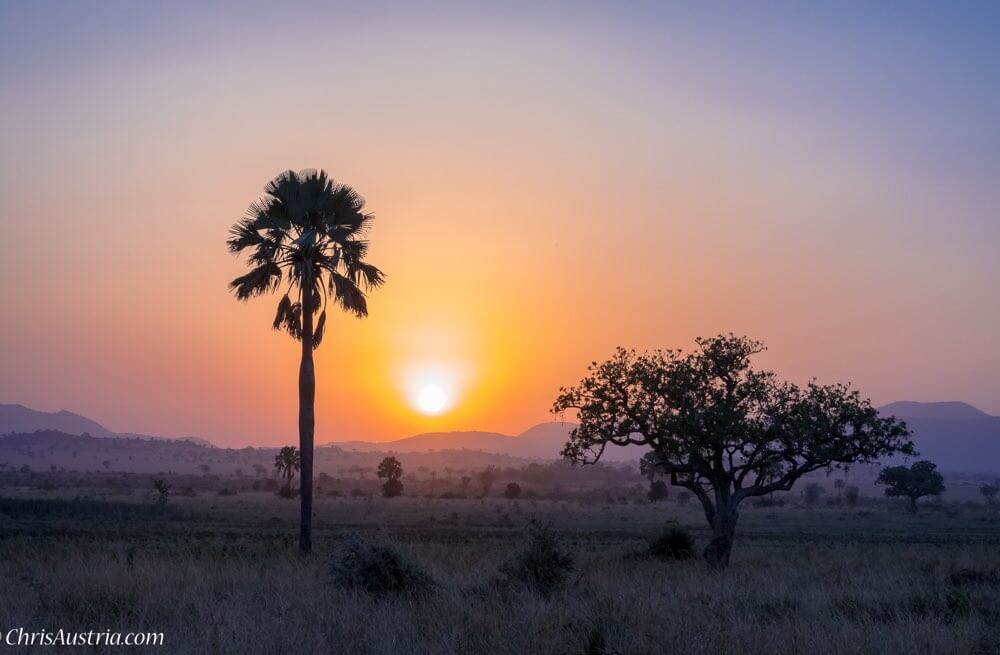 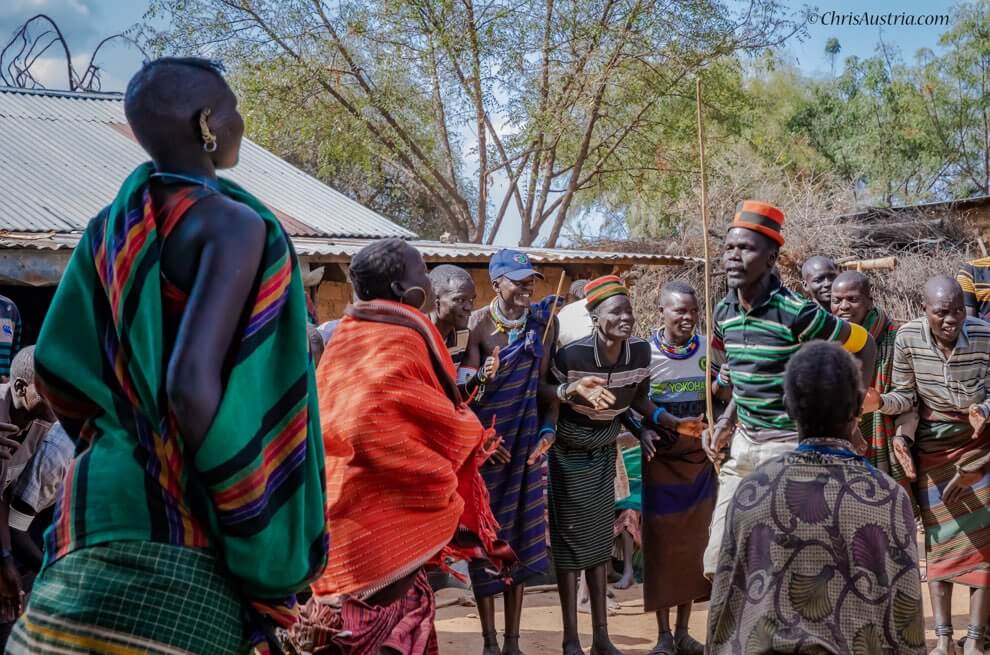 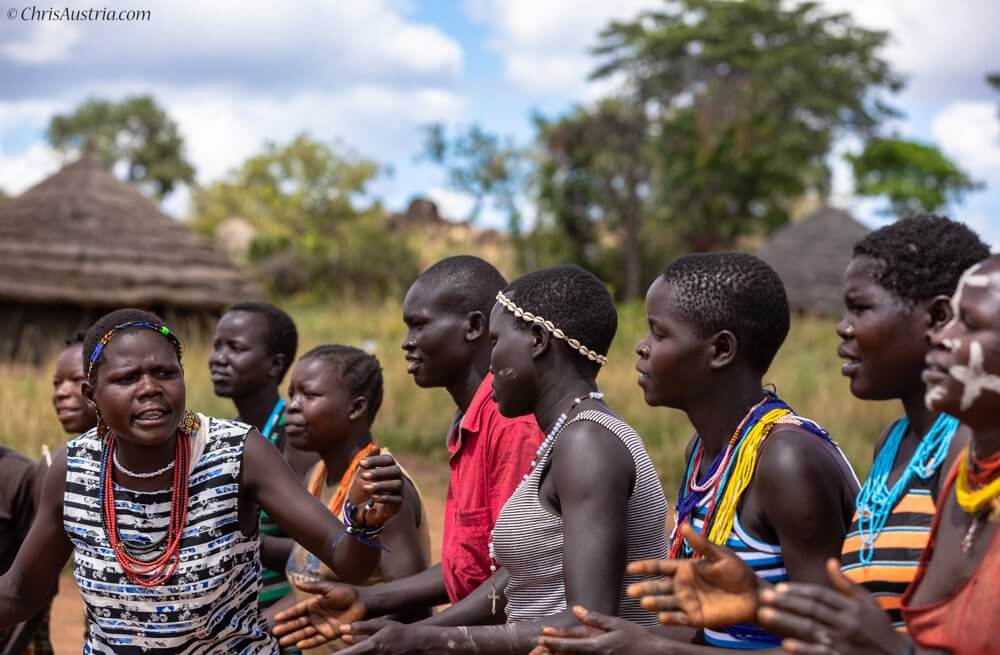 Our epic journey to the farthest reaches of the Karamoja

Our journey to the farthest reaches of the Karamoja felt like a wildlife pilgrimage of sorts. I knew that my experiences here would be different than the other locations I have traveled to in Africa. Kidepo is a 13 hour drive from Kampala, Uganda’s capital. It is possible to travel here by plane, but I didn’t want to miss any of the sites along the way.

My friend and I departed Kampala at 6:00 am, and made sure we had enough water and supplies with us in the vehicle. Traveling through northern Uganda was such an interesting trip.

The weather was hot, the roads were difficult, jarring, and filled with plumes of reddish dust clouds, but I loved every minute of it. The scenery at Karuma Falls was exceptional, and I also enjoyed traveling through the towns of Gulu and Kitgum. We took a break and had lunch at Bomah Hotel in Gulu. The food was delicious, and the staff was very welcoming.

The anticipation I felt as we drove through Karenga, a sub-county, was exhilarating. It was now nighttime, and the darkness held so much mystery for me. I could see the faint outline of the formidable mountains surrounding us, and there was a canopy of stars glimmering above us. I kept wondering to myself what this wilderness landscape looked like in the daylight. For now, it was an enigma, and I reflected on what mysteries Kidepo held. We arrived at the park gate at 9:30 pm, and as we drove through the park, I could see shadows of animals running past our vehicles, their eyes gleaming in the darkness. 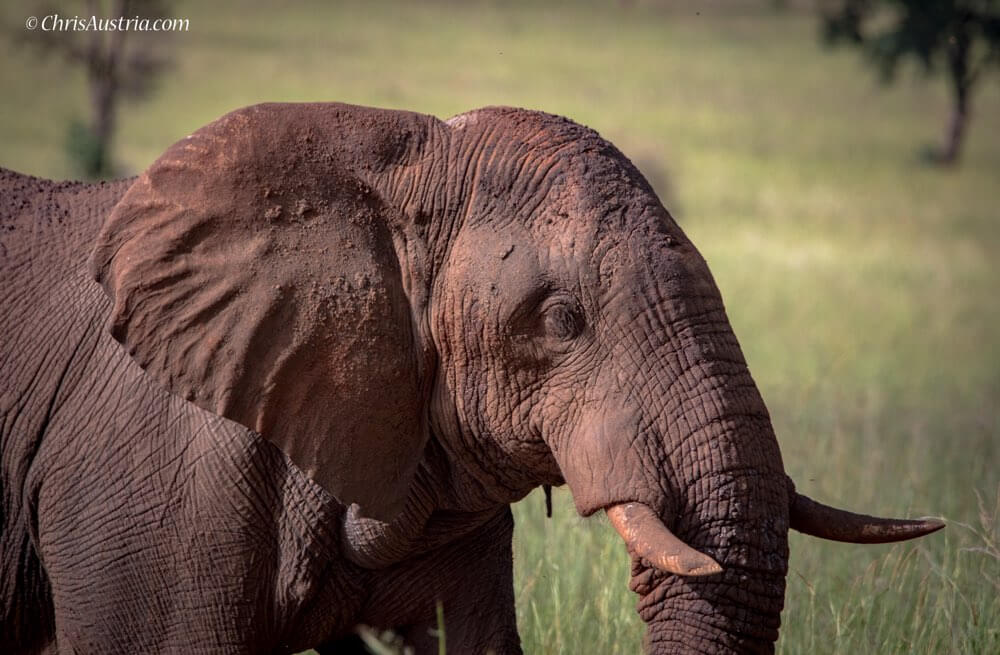 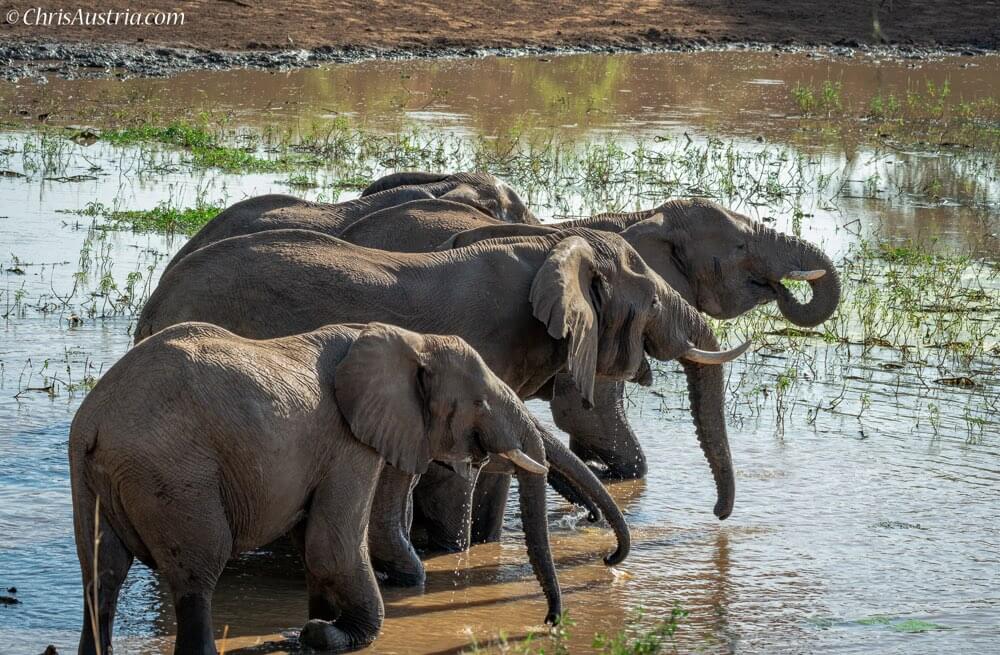 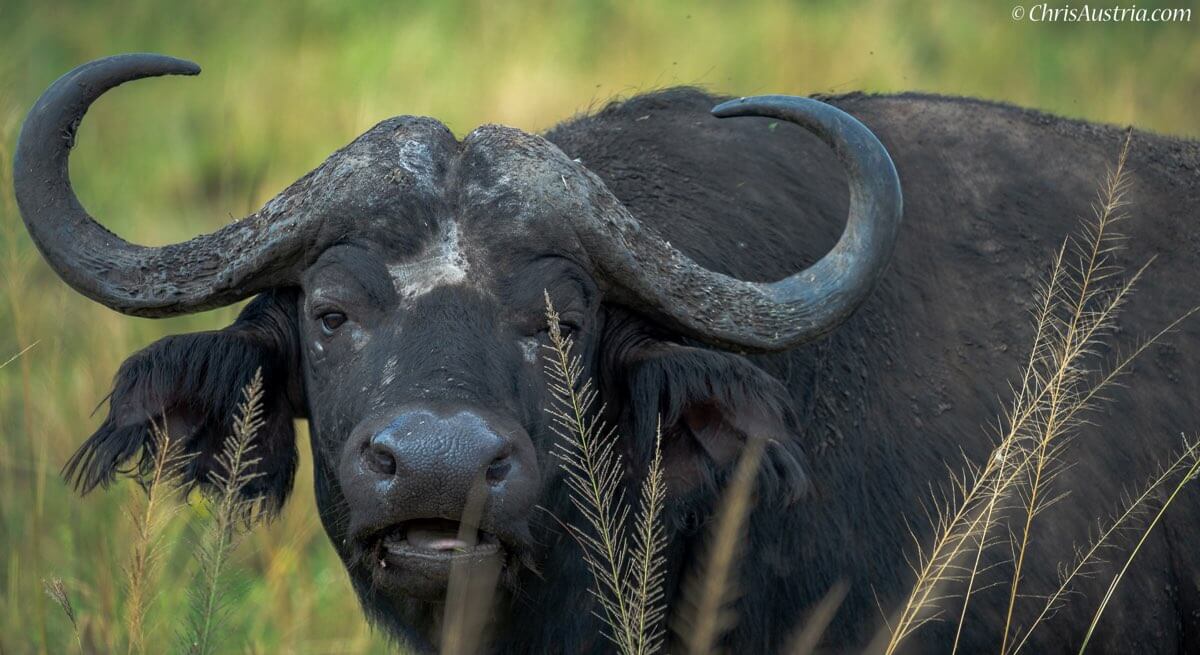 We woke up early the next morning, and before me were vast plains, and beautiful savannahs that glowed in the sun. We met our ranger-guide Lotuk Bernard who is from the Ik ethnic group in Karamoja, and we began our safari into the park. Within Kidepo National Park are two valleys; the Kidepo Valley, and the Narus Valley which is regarded as the heart of the park because it is the only year round water source for wildlife. Many of the game trails are located in the Narus Valley. The scenery in Kidepo was outstanding, and we were completely surrounded by majestic mountain ranges, their outlines etched in the misty sky. Within 20 minutes of driving on the Kakine Circuit, we observed a family of elephants, including young calves. They were undisturbed by our presence as they grazed peacefully in the plains. It was a very memorable experience to observe the elephants here in Kidepo, and we saw numerous herds in various locations throughout the park.

As we approached the Katurum Circuit, I saw a sudden explosion of dust clouds, and white cattle egrets flying into the air. The valley was now an ocean of black buffalo. This stampede was extraordinary to see, as thousands of buffalo ran directly in front of us. I could hear the sound of their hooves as they ran, a sea of black, rolling in waves. A group of them quickly turned around to look at us; an unforgettable stare that will cause even male lions to stop in their tracks.

Later that afternoon, we saw groups of giraffes, and zebras grazing together. This was classic African savannah scenery. Kidepo is the perfect park for those wanting to take photos and videos of a vast variety of wildlife. While we were driving, we noticed a large buffalo carcass. This animal had recently been killed, and high up in the sky were vultures, waiting for us to leave so they could finish their meal. We drove for another 5 minutes, and my friend suddenly stopped the vehicle, and told me to look to the left. Hidden in the tall grasses was a very large male lion. Words cannot describe what it felt like having a close encounter with this big cat in Kidepo. He stared at me ominously, his golden tawny mane blending in perfectly with the windblown vegetation of the African savannahs. This male lion never looked away from me, not even for a second. I also noticed a beautiful female lioness was hiding in the grasses next to the male; her eyes shimmering in the heat of the sun. Her gaze was piercing, with a glowing intensity. These lions recently hunted the buffalo that we saw, gorged themselves, and they were now resting lazily in the grasses. After a few minutes, this powerful feline predator sounded off with a low, guttural growl, warning us to back off, and of course we heeded his warning. The sound was primal, and it felt like it went right through me. 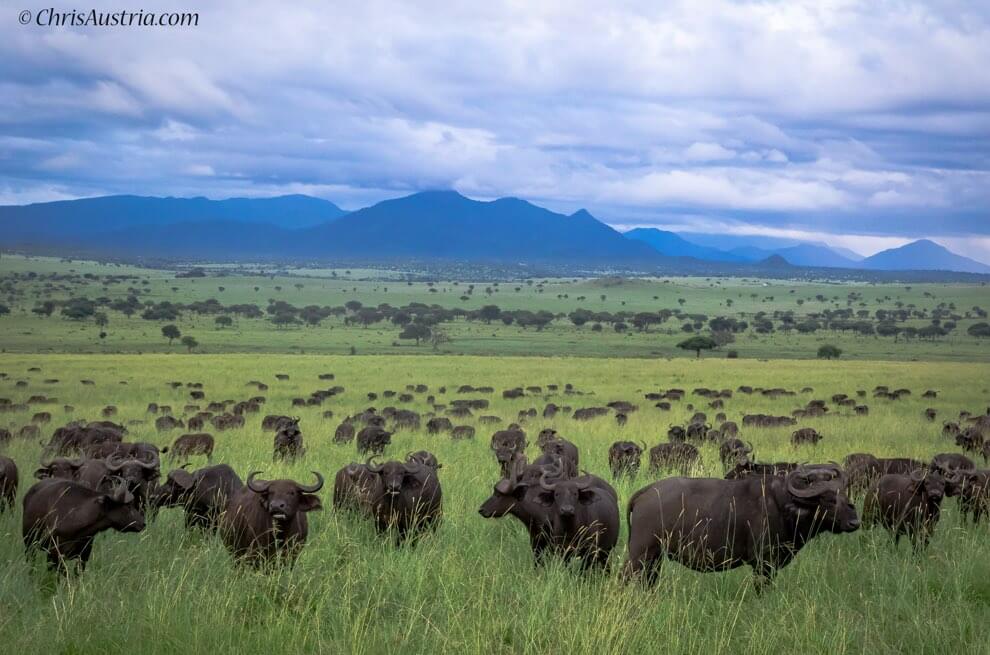 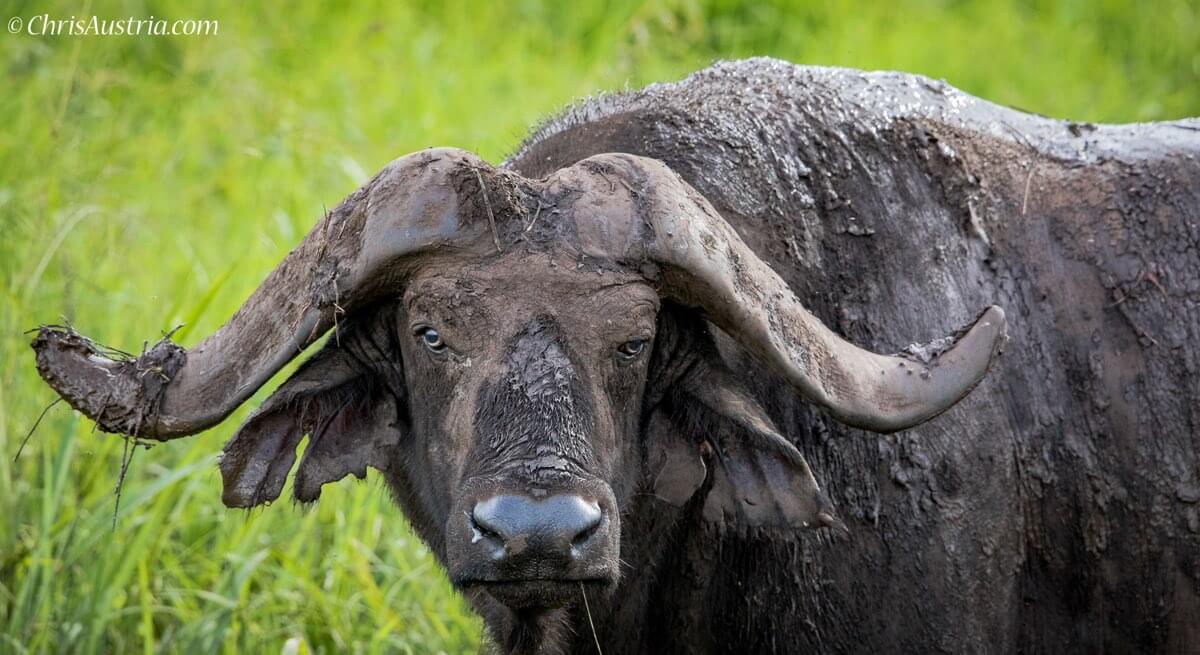 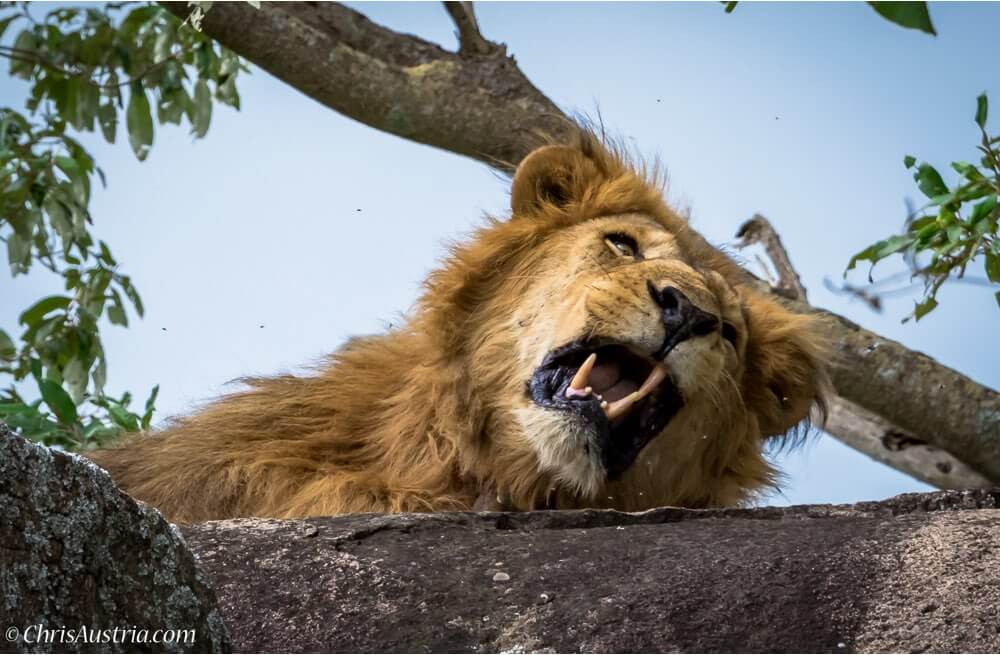 The scenery in Kidepo Valley is an exquisite and stunning representation of the classic African plains on a grandiose scale. The diversity of beauty is magnificent here, and the wilderness landscapes are unforgettable. The arid, rolling savannahs and the variety of trees and vegetation creates spectacular scenery. Kidepo Valley is dramatic on all levels. The faint outline of the rugged mountains ranges against the hazy blue sky provides a 360-degree backdrop for the birds of prey that are riding the thermals.

Kidepo Valley is home to many species of animals, and it has significant wildlife populations. During the course of our journey, we also saw Jackson’s Hartebeests, Guenther’s dik-dik, bushbucks, wart hogs, vervet monkeys, and a variety of bird species. I definitely plan on visiting Karamoja, and Kidepo Valley again, and I truly understand why Uganda is called the Pearl Of Africa.

I visited many national parks with Chris Austria Safaris, including Murchison Falls, Queen Elizabeth, Bwindi, and Kidepo. Chris is a great guide. He is friendly, outgoing, and speaks the local languages, which is an important opening with other cultures, and communities. He loves wildlife, culture, and everything about Uganda. His business partner George is also a wonderful person, and very engaging. I highly recommend travelling with Chris Austria Safaris. They will listen to what you are interested in seeing, and will try their best to accommodate you. Overall an excellent tour experience.

Going on safari with Chris was one of the most rewarding, and amazing experiences I’ve ever had. I specifically wanted to go on a safari to see wildlife in their natural habitat, but Chris provided an experience that was so much more than that, thanks to his unique relationship with the Ugandan culture, and people. Chris and his business partner/safari driver George are gracious hosts who truly enjoy showing people the amazing things Uganda has to offer. Overall, if you want to have a safari that isn’t your standard cookie-cutter experience, I highly recommend Chris Austria Safaris.

It was a pleasure for me and my friend to spending 19 days traveling Uganda and Rwanda with Chris Austria Safaris. I wanted an experience that included the land, wildlife as well as the people.
We were able to custom design our itinerary with Chris. The pace was fast with plenty of animals, villages and welcoming people. In addition we visited orphanages and health clinics.
The skies are beautify the land is varied and lush. The temperatures are perfect with welcoming rain. A photographers dream